A Beginner's Guide to Terpenes

Contrary to what you may think about all the different varieties of cannabis available, there is a lot more to understanding how each strain will affect you, than simply knowing the generic differences between sativa vs indica.

For years many scientists and cannabis enthusiasts believed that most of the differences between strains could be divided up between indica or sativa (with less easily categorized strains falling under the 'hybrid' title).

In recent years, however, it was discovered that there's a lot more to understanding how cannabis works, than simply identifying the best indica strains or best sativa strains.

This discovery came from a better understanding of terpenes; the part of the cannabis plant which determines the smell and taste of the flower when it's consumed.

With our continued efforts to be known as the best cannabis dispensary in Ontario, House of Cannabis put together this educational guide to help you better understand what terpenes are, as well as how they impact your cannabis experiences.


Knowing what terpenes are, and how they work, is absolutely essential if your goal is finding the best weed strains to suit your personal preferences.

There's More to Strains Than Indica vs Sativa

Although cannabis is often known for its sour, musky scent, which is sometimes described as 'skunky', there are actually a huge array of different scents and tastes that can be found in the best cannabis strains. In fact, over 100 organic terpenes varieties have already been identified in cannabis.

More than just their smells and tastes, it's been discovered that terpenes in weed also have a huge impact on the types of effects that cannabis will have on you.

Everything from stress relief, to increased appetite and even elevated creative energies can all be tied back to the terpenes in the best weed strains.

Terpenes are actually secreted by the same glands in cannabis that produce cannabinoids like THC and CBD, which could explain why they have such a huge impact on our bodies.

From an organic perspective, terpenes are actually a natural deterrent for predators, as well as a lure for potential pollinators. Nature is amazing, isn’t it? 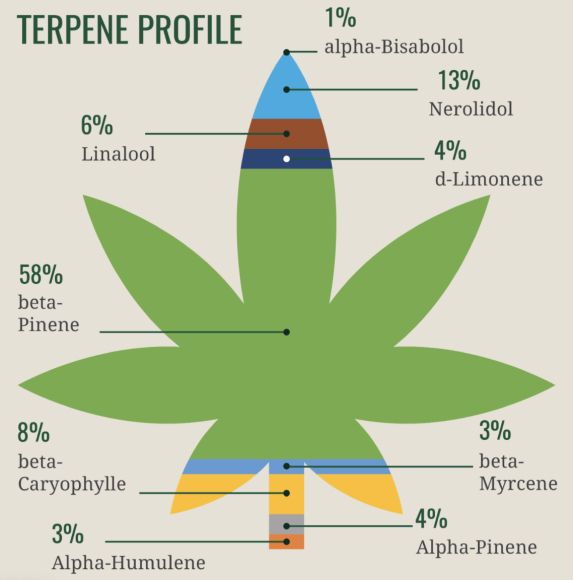 Terpenes and Their Effects

Understanding the Differences is Important

With over 100 currently identified terpenes available across thousands of cannabis strains, it's impossible to cover all the terpenes and their effects.

However, let's talk about a few of the most commonly found terpenes, and their effects on us.

Myrcene: Found in cannabis strains such as 'Granddaddy Purple' and 'Blue Dream', this terpene is known for its soothing, relaxing effects, such as pain relief and reducing inflammation.

Limonene: Typically found in strains like 'Jack Herer' and 'Sour Diesel', this terpene is known for its ability to improve the mood of users, as well as reduce stress.

Beta-Pinene: Available in strains like 'Strawberry Cough' and 'Island Sweet Skunk', strains with this terpene are known for their strong anti-inflammatory effects, as well as improving airflow and respiratory functions.

Linalool: Well-known strains with this terpene include 'Amnesia Haze' and 'OG Shark', this terpene is popular for its very strong sedative and relaxation effects, which could be why it's so popular with those experiencing arthritis or insomnia.

As we mentioned above, the smell and taste of the best weed strains are also determined by the terpenes found in them. Anything from pine trees to nuts and berries, the taste and scent varieties are almost endless. Let's take a look at the differences in the same four terpenes we discussed earlier:

Myrcene: As the most commonly occurring terpene (making up as much as 65% of the terpene profile in some strains), it's no shock that this variety has an earthy, musky smell, sometimes compared to cloves. Its taste has been called fruity, being compared to the aroma enjoyed while eating red grapes.

Limonene: This terpene is also found very frequently in cleaning products and cosmetics, which could be explained by its citrusy, lemon-like smell. This is the second most commonly found terpene in cannabis, which could explain why so many strains are said to have notes of citrus in their profiles.

Beta-Pinene: Often compared to many outdoor strains, this variety of terpene is often compared to pine needles in its smell, while its taste is earthy, spicy and sometimes resembling that of orange peel.

Linalool: Known for its floral and often spicy scent, this strain is interestingly also found in lavender, mint, coriander and cinnamon, which could explain why this aromatic terpene's spicy aroma is so enticing.

The Best Terpenes in Toronto

As you can see, there are a plethora of different smells and tastes that can be associated with different strains of cannabis, and they are as unique as the users that enjoy them.

If you'd like to learn more about terpenes, visit one of our store locations in Toronto, Barrie, Kitchener, Hamilton or Kingston. One of our expert budtenders at any of our locations will be more than happy to help you figure out which terpenes will best fit your tastes, and then suggest some varieties we have in stock that include those selections.

It's all part of House of Cannabis' commitment to helping our customers get the most out of their cannabis experiences. Lots of places say they've got the best weed strains, but it's the knowledge to know which strains will work best for which customers that sets up apart from the rest.

Visit us today and see why House of Cannabis is the best cannabis dispensary in Ontario.