What is Live Resin?

What is live resin, and how is it consumed? Live resin is a type of cannabis concentrate, and like all concentrates, it is very powerful compared to its source material. Cannabis concentrates are extremely potent in cannabinoid content; specifically containing high levels of THC, with some testing as high as 96% THC. Live resin is no exception. It packs a heavy, THC-infused punch.

A disclaimer we think is important to include: those who are new to using cannabis shouldn’t use concentrates, unless they are working closely with a cannabis-educated physician. They should start with something gentler and less potent, such as smoking or vaporizing raw cannabis flower.

The thing that makes live resin unique from other cannabis concentrates (like shatter, wax, dabs, etc.) because it is produced from flowers that haven't been dried or cured. The end result is a concentrate full of terpenes, flavonoids and other important compounds.

Live resin is only produced using cannabis flower buds and its sugar leaves, while the fan leaves and stalks are excluded. Traditionally with other concentrates, many of the desired plant compounds are lost in the curing and drying processes. However, live resin is made with cannabis that was frozen immediately after harvesting, in order to retain these compounds; namely the terpenes and flavonoids. As a result of the incredible flavor retention, live resin smells exactly like the flower did when it was freshly harvested.

The flower is flash-frozen, meaning it’s frozen in a short period of time, at incredibly low temperatures. This is done using liquid nitrogen or dry ice, and the flower is held at these cold temperatures throughout the extraction process.

Typically, the solvent used for extraction is frozen as well while the extraction process is taking place. They do this in order to retain as much of these powerful plant compounds as possible and maximize the potency of the end result.

Flash-freezing is not a new concept, as that is how many frozen fruits and vegetables are produced in order to preserve peak ripeness, too!

Live resin is typically extracted with butane, although other solvents like ethanol and CO2 are used less frequently. After the live resin is extracted, it’s then purged in a vacuum oven.

Purging removes any residual solvents, like butane, that are left in the extract. The end product can be a range of different results. Some live resin batches are runnier and more malleable than others, depending on their retained terpene levels. More terpenes generally result in a more viscous live resin.

The color of live resin can vary in colour as well, but most are usually a golden-amber hue. 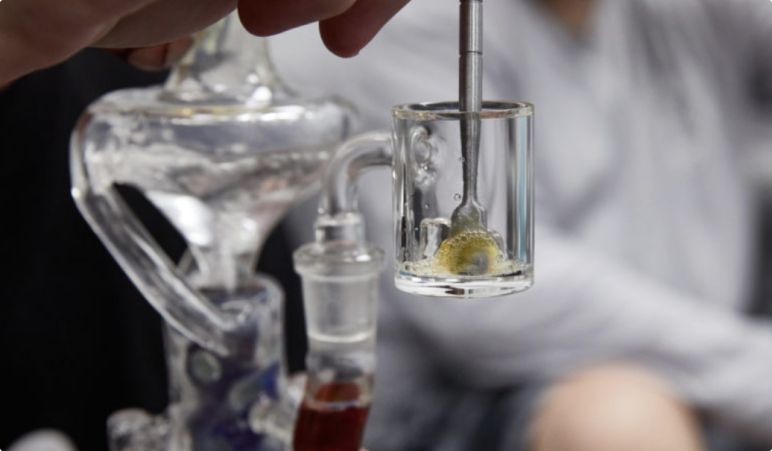 What’s the History of Live Resin

Cannabis extraction is not a new idea. In fact, it’s been used in society for ages. However, the method behind live resin was only discovered in 2013 by cannabis cultivator William ‘Kind Bill’ and Jason ‘Giddy Up’ Emo, EmoTek Labs founder and cannabis entrepreneur.

Kind Bill started the first legal grow operation in 2010, and it was dedicated to exclusively producing cannabis concentrates in Colorado. During one of his harvests, he wondered how he might be able to produce extracts from the plant he was trimming.

He assumed that the aroma from fresh bud would be stronger than that of cured and dried bud using traditional extraction methods. He figured if he could capture that terpene profile at its peak, maybe he could produce an extract with that same incredible aroma he was enjoying.

It wasn’t until September of 2013 when Kind Bill met Giddy Up that the live resin extraction process began to come together; although he had tried by himself previously. Bill was certain EmoTek’s closed-loop extraction device (called the OBE-Dos model), would bring his idea to fruition.

For more than a month, Giddy Up and Kind Bill collaborated together to create this now widely-utilized extraction technique. Colorado and California quickly became hot spots for live resin, and the rest is history.

How Do I Consume Live Resin?

Live resin is consumed by dabbing, it is definitely not advised to smoke live resin like you would raw cannabis flower. Dabbing requires a ‘dab rig’ (or sometimes just referred to as simply a ‘rig’), and a flat bowl called a ‘nail’. Nails are produced from a different material than traditional glass bowls and can withstand the higher temperatures that are required to properly activate the live resin.

When you’re dabbing live resin, it’s advised to use a dabber with a spoon-shaped tip; instead of a flat-tipped dabber, like those used for most other extracts. To take the dab, you’ll need to pre-heat the nail with a gas-powered torch. Frequently, these are fueled by butane.

The temperature of the nail needs to be exact. Not so hot that it destroys all of the compounds in the plant, but hot enough to activate the cannabinoids and terpenes. The ideal temperature for dabbing live resin is said to be between 315- and 400-degrees Fahrenheit (about 157-204 degrees Celsius). It’s recommended to use the lower-end of the temperature range whenever possible, to maximize the flavor and efficiency of the live resin.

Once your nail has reached your desired temperature, turn off your torch and set it aside. You’ll then take your spoon-shaped dabber and drop your live resin onto your hot nail. Immediately after the live resin touches the nail, it’s going to begin cooking. As the vapor begins being emitted, inhale through the opening on the other side of the rig.

House of Cannabis specializes in ensuring our customers are well-informed about the cannabis products they’re consuming. Visit one of our store locations across Ontario, and we’d be happy to help you find the products that are right for you.